At our March meeting, Prof. Kevin Deegan-Krause of Wayne State University provided us with a fantastic presentation about how ranked choice voting (also known as "instant runoff voting") works, why it's a better way of electing candidates and how you can help bring it to Michigan.

You can also learn more by visiting RankMIVote.org!

Register for the Zoom Meeting Today!

Register for the Zoom Meeting Today!

Help write postcards to send to area voters touting the great work our own Haley Stevens (MI-09) is doing in Congress!

Please join us at our next virtual meeting on Tuesday, February 16th from 7pm - 9pm!

Our guest speakers this month include Oakland County Deputy Executive Rudy Hobbs*, who will provide an update on the status of the COVID-19 pandemic and the ramping up of the vaccination project, and Michigan Democratic Party Director of Party Affairs Hayley Alderman, who will give us an overview of just how the MDP is actually structured.

Register in advance for this meeting

(After registering, you will receive a confirmation email containing information about joining the meeting)

The first BB Dems meeting of 2021 is Tuesday, January 19th from 7pm - 9pm...the evening before Joe Biden & Kamala Harris are sworn in as the next President & Vice-President of the United States!

The primary order of business will be our annual election for club executive board positions. Normally we don't require registration for our online meetings, but we are for January given the topic of this one. There will also be a vote on a resolution to move the board election up a month from January to December going forward.

There are 7 positions which have to be voted on: Chair, Vice-Chair, Treasurer, Recording Secretary, Corresponding Secretary and 2 Trustees at Large.

Any BB Dems member in good standing can run for one of these offices or to vote for candidates. To do so, you have to reside in the BB Dems area (Birmingham, Bloomfield Hills, Bloomfield Township, Franklin, Bingham Farms or Beverly Hills) and have paid your $15.00 annual dues prior to our January 19th election.

Only members in good standing who actually attend the meeting may vote. If you're interested in running for one of the positions, please email me at chair@bbdems.org before January 19th.

With the dust settling on the most important Presidential election in history, we'll celebrate our successes, see where we fell short and discuss the future of Oakland County, the state of Michigan and the United States in a post-Trump world.

In addition, since we're in the middle of the annual ACA Open Enrollment Period and the law is (once again) at risk, Chair Charles Gaba will give a refresher presentation about how the ACA works, where it doesn't, how to fix it and an overview of the lawsuit threatening to tear it all down.

Use this link to join us via Zoom!

First: The #1 priority this year was to remove Donald Trump from power. Everything else--EVERYTHING else--had to be secondary. It appears that we accomplished that goal.

As of this writing, Joe Biden is ahead of Donald Trump by nearly 4 million votes and, more importantly, is ahead in states representing 306 Electoral Votes...well over the 270 needed to win the White House. This includes Michigan, where Biden's lead is nearly 150,000 votes. For comparison, Trump won by around 10,000 votes in 2016. In fact, Biden has already far surpassed the previous record for the most votes won by any Presidential candidate in history...Barack Obama in 2008.

There are four states where the winner hasn't been confirmed by major outlets yet: Arizona, Nevada and Georgia (where Biden is ahead) and North Carolina (where he's behind), but even setting those aside, Biden still has at least 273 Electoral Votes thanks to Pennsylvania.

Trump and the GOP are, of course, attempting to throw every absurd legal challenge they possibly can at the process, but so far they've failed across the board.

There are still steps to be taken--Georgia and possibly Arizona will likely go to recounts; every state still has to officially canvass & certify their results; and of course the Electoral College members have to formally meet, the newly-sworn in Congress has to formally certify the EC vote, and he has to be officially sworn in as President at noon on January 20th, 2021.

Having said that...WE DEFEATED DONALD TRUMP BY A SOLID MARGIN! 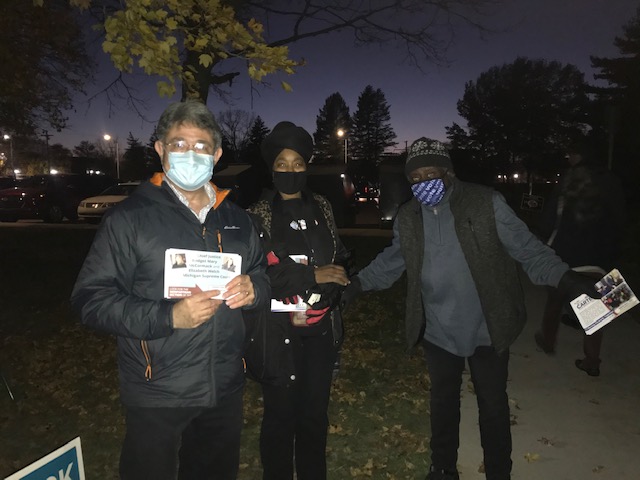 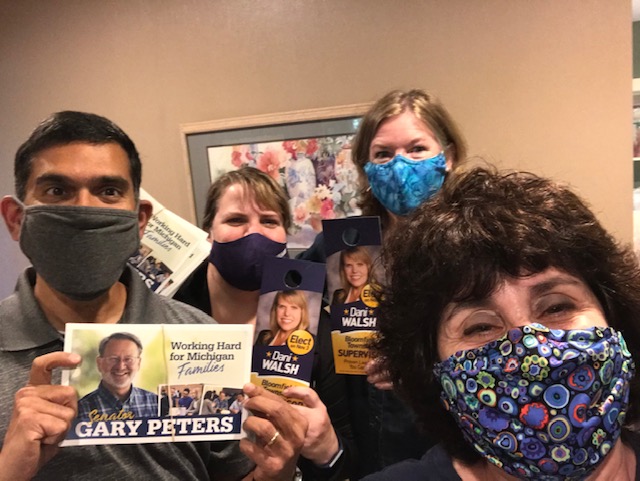 Don't Mail Your Ballot: Take it to the Drop Box in Person!

At this point, anyone who plans on voting by absentee ballot should drop off their ballot IN PERSON.

Do not put it in the mail at this point, as it may not arrive in time to be counted.

Via the Detroit Free Press:

Michigan residents voting absentee are now encouraged by the Michigan Secretary of State to drop off ballots at their local clerk’s office or drop box and not via mail.

Potential voters who are not registered yet can no longer register to vote by mail or online; the postmark deadline has passed. Instead, they will need to visit their local clerk’s office with proof of residency to fill out their voter application there.

You can apply for and fill out an absentee ballot during the same trip to the clerk's office.

Registered voters can request an absentee ballot at their clerk’s office from now until Nov. 2. You must return it by 8 p.m. on Election Day (Nov. 3).

All registered voters who do not request an absentee ballot by Nov. 2, must vote in person at their local polling location.

HERE'S WHERE BB DEMS AREA VOTERS SHOULD DROP OFF THEIR BALLOT: